Home Insight of the Baalbek Temple : By C V Srikar 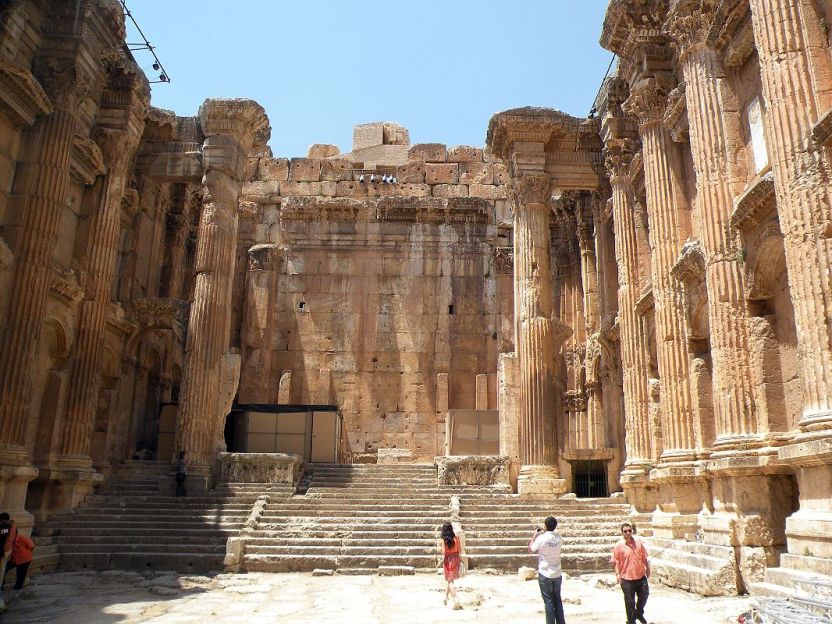 Roman emperor Antoninus Pius is feeling joy unbound. His architect and the people ‘from the east’ have exceeded his expectations. Perhaps history would come to reckon the temple he has built for the roman god Bacchus as a world heritage site. Emperor Pius is curious how the engineers and masons are transporting almost 50 feet columns through an array of transportation system viz. elephants, wedges, capstan et al. The temple, sees the emperor, is sitting atop three thousand-tone stones. Then, even he, the emperor, could not, but bow before the sheer size of the structure. As days pass, emperor Pius sees elaborate fire-rituals in the temple, which was taught by the ‘wise men from the east.’ They are taught some esoteric philosophical and spiritual subject called Yoga. He wonders how, the lotuses in the temple might actually look in the lake, in those places from where these people have come. But again they have come from India, where every human aspires to go.

Fast forward to now, and I am talking about the Baalbek temple in modern day Lebanon. It survived a gamut of wars and civil wars in the region. It was built close to the courtyard in front of the larger temple of Jupiter-Baal. The period of construction may have been between, 150 AD to 250 AD. When the temple complex fell into disrepair, the Temple of Bacchus was protected by the rubble of the rest of the site’s ruins. The temple is slightly smaller than Temple of Jupiter and is 66m long, 35m wide, and 31m high. Its walls are adorned by forty-two Corinthian columns, nineteen of which remain upright in position standing 19 m high. The columns support a richly carved entablature. Inside, the cellar is decorated with Corinthian “half-columns” flanking two levels of niches on each side, containing scenes from the birth and life of Bacchus. The adyton (inner shrine) stands above a flight of steps. Some historic Roman coins depict the structure of this temple along with Temple of Jupiter. The storm god Ba’al was worshipped in this temple. The temple is surrounded by forty-two columns—8 along each end and 15 along each side —nearly 20 m (66 ft) in height. These were probably erected in a rough state and then rounded, polished, and decorated in position. The entrance was preserved as late as the XVI century, but the keystone of the lintel had slid 2 ft (1 m) following  1759 earthquakes. The interior of the temple is divided into a 98 ft (30 m) nave and a 36 ft (11 m) adytum or sanctuary on a platform raised 5 ft (2 m) above it and fronted by 13 steps. 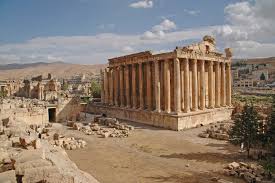 In 1984, several ruins of Baalbek, including the Temple of Bacchus, were inscribed as a World Heritage Site. The temple is known for its impressive dimensions, richly decorated stone work and monumental gate with Bacchic figures. The decorative stone carving includes rows of lions and bulls, which were motifs symbolically associated with the two deities.

While this is as it is, things which led to Baalbek’s association with India are some curious ones like these: Inside the temple there are enormous carvings of lotuses, which are not found in Lebanon. Local lore has it about how elephants were used to transport the large stone carvings from a nearby quarry to the site. The catch-elephants are not endemic to Lebanon. But the most curios stuff, is one found in Baalbek museum; a 16 cornered stone called as Guru pooja stone in Yogic lexicon. And an anahata symbol of two interlocked triangles adorned with six petals.

This shouldn’t be surprising if we see a larger context. India was then a civilization well established even as other civilizations were emerging across the planet. Our GDP by estimate was one-third of the world GDP and India’s consumption pattern decided world economy, much like US’s now.

In fact, such temples as Angkor Vat and Borobudur used Indic architectural systems and patterns. The historically oppressed Yazidis of Iraq have their god as a Peacock angel. But Iraq is no home for peacocks, India is. Meaning, Yazidis had Indian roots. But one thing that nags me is, why didn’t India have enormous temples or structures like Baalbek and more importantly why did India lose its influence?

Maybe these things are hard to be known and can only be guessed with our own prejudices and beliefs. But then again, India is a mythical country!